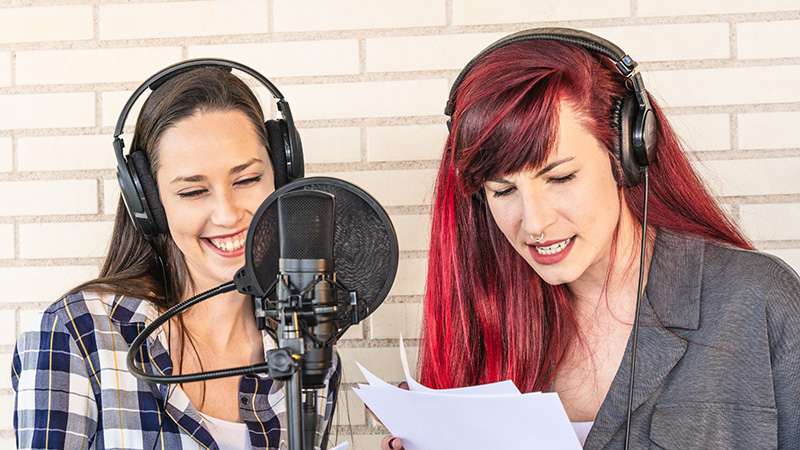 Dubbing terms used in video localization can be nuanced; therefore, to communicate clearly with your clients and localization service provider, it’s a good idea to have a clear grasp of the most important ones and the subtle differences between them.

Thanks to film, most people are familiar with the terms dubbing and voiceover, but since video has become the most popular communication medium for businesses around the world, the variety of projects that can be produced – from marketing to employee training – has resulted in industry-specific terminology that’s useful to know when quoting, creating, or localizing videos into other languages.

The previous blog post explained the 8 important terms to know when subtitling a video. In this post, we’re going to look at essential dubbing terms used in video localization and explore their nuanced meanings.

What’s the difference between Dubbing & Voiceover?

Depending on the industry and type of video, there are fine differences in definition. For our purposes here, our definitions are geared towards use in the localization of business videos (not films or TV shows).

Voiceover is placing a voice track over another voice track in the video, more as a narration of what’s being said in the video.  In this case, the original audio track can be heard in the background.

What Are the Different Types of Dubbing Methods?

Dubbed dialogue that is found in movies and TV shows requires that the localized dialogue matches the lip movements of the original speaker (lip synching) as well as replicating the same tone, and emotions. Dubbing is not always needed when localizing non-entertainment videos, such as documentaries and business videos for marketing, training, e-learning, and similar purposes.

Depending on the type of video content and its usage, other types of dubbing may be better suited, as described below.

In the UN-style voice-over method, the original speaker can be heard faintly in the background, so that the audience is aware that the translated voice over is acting as an interpretation of what is being said.  A few seconds of the original audio is heard, then the volume drops and the localized narrating voiceover comes in over top. Although the localized audio starts a few seconds later, the recording time of the target language is synced to match the duration of the original audio.

This method of dubbing informs the viewer that a foreign language is being spoken, but they can still get a sense of the original speaker’s voice and tone. UN-style dubbing is used most often for documentaries, factual or non-scripted TV shows, and interview-based videos.

Video below is an example of UN-style dubbing.

Lip synch dubbing means that the localized dialogue matches the lip movements of the speaker on the screen. It’s the most precise and expensive of all dubbing methods because:

• it requires that the translated script match not only to the original audio in length, but even the movement of the speaker’s lips.

• it needs a skilled voice over actor who can record the dialogue to not only match the lip movements but also convey the same tone, emotions and physical motion.

Video below is an example of Lip Synch Dubbing.

Instead of matching the lip movements, which is needed in lip synch dubbing, phrase synch dubbing only requires that the spoken localized dialogue matches phrase by phrase of the original dialogue. This is a somewhat cheaper option if you want to give the allusion of lip synching because matching phrase by phrase will ensure the timing of each phrase matches perfectly. However, the translation of the original script into the target language must be adjusted to accommodate phrase-by-phrase matching.

What’s the difference between Timed vs Untimed Recording?

Similar to phrase synch dubbing, the main challenge with timed recordings is the target language is often not the same length as the original, which means the translation of the script needs to accommodate the length of the original audio track. In turn, this requires the voice talent to ensure the time matches the original recording without sounding too rushed or slow.

(You can learn more by reading our post about Timed or Untimed Voiceover Audio.)

Although there are more terms used when translating videos using voice (either human or synthetic), these are the most common dubbing terms in the industry. Clear communication usually helps to keep projects on time and budget. These dubbing terms used in video localization should help facilitate your communication with your client and multimedia localization services provider. Whenever it’s time to discuss the voice part of a video project, you can ask targeted questions for a smoother process.

As always, please feel free to reach out with any questions or with any video localization projects that you need help with!

LEARN ABOUT OUR DUBBING SERVICES